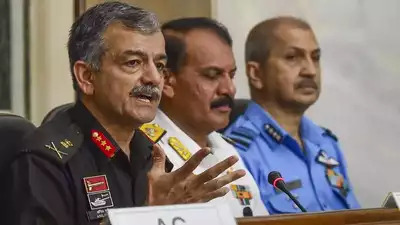 The Department of Military Affairs (DMA) has categorically denied any possibility of a roll back of Agnipath recruitment scheme.

The announcement came-in on Sunday the 19th of June 2022 by additional secretary in DMA, Lt. Gen. Anil Puri who along with other senior tri-service officers addressed national media at their South Block office in the Capital.

Undeterred by the recent spate of violent protests, the ministry of defence also stated that all applicants of Agnipath short service scheme will be asked to furnish a pledge that they had not taken part in any vandalism or any kind of criminal activity particularly in the recent past.

“There is no scope of in-discipline in the services”, said Lt. Gen Puri while adding that all due diligence will be conducted by police before a successful Agniveer is inducted in the army, navy and the air force.

The Navy is all prepped-up to receive their first batch of Agniveer on 21st of November 2022 at INS Chilka in Odisha where fresh sailors will undergo basic training.

Representing the Navy at the press conference, Vice Admiral DK Tripathi said, “The Indian Navy has completed the process for recruitment of Agniveers. We will send our advertisement to the Ministry of Information and Broadcasting by June 25. The first Agniveer will report to the Training Institute by November 21,” he added.

The Air Force rep Air Marshal SK Jha said a detailed brief on the Agnipath scheme is already uploaded on its website.

Informing about the recruitment process, Air Marshal SK Jha said that the registration process for recruitment of Agniveers will start from June 24.

One month after that the online examination will be taken and the first batch would be enrolled by December and training would commence by December 30 this year,  Air Marshal Jha added.