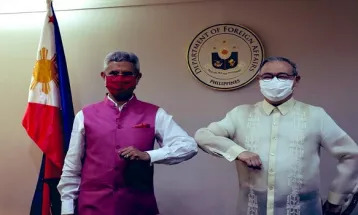 India has found beyond reasonable doubt that Philippines understands growing threat of China in the South China Sea and has described India as its partner in promoting peace and security in the Indo-Pacific region.

Expressing this during his interactions with External Affairs Minister S Jaishankar in Manila on Monday the 14th February 2022, the Philippines Foreign Affairs Secretary Teodoro Locsin stated that both countries, “stand at the crossroads of the busiest sea lanes in the world, knows the critical role of the rule of law in maintaining stability” in the seas, which are vital lifelines to their nations.

The two countries will mark the 75th anniversary of the establishment of diplomatic relations in 2024. “A good reason to keep up the momentum of our engagements,” Teodoro Locsin said.

EAM Jaishankar reached Manila on Sunday for a three day official visit where talks with his counterpart are focused on national security and come days after Philippines purchased three batteries of made-in-India BrahMos supersonic cruise missile systems for its navy worth USD 375 million .