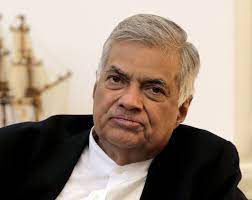 Seasoned politician and leader of United National Party (UNP) leader Ranil Wickremesinghe  was on Thursday the 12th of May 2022 was installed as the next prime minister of Sri Lanka.

The island nation is in dire straits of financial help while battling   worst economic crisis.

Sri Lanka has seen violent anti-government protests which culminated with the resignation of all powerful Mahindra Rajapaksa.
Wickremesinghe, who has served as Prime Minister as many as five times, was given oath by Gotabaya Rajapaksa.
Local media in Colombo was reporting that Wickremesinghe accepted the post of prime minister after Sri Lanka Podujana Peramuna (SLPP) MPs pledged their support.