Accurate test done at the desert of Pokharan 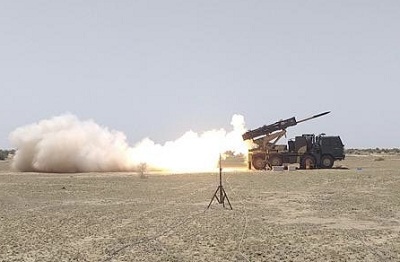 Pinaka, the deadliest cluster missile system that India has successfully developed tested its newest version on Saturday the 9th of April 2022 having enhanced range of 60 kms.

According to a defence ministry release issued earlier in the day, the new Pinaka Mk-I (Enhanced) Rocket System (EPRS) and Pinaka Area Denial Munition (ADM) rocket systems was successfully flight-tested by Defence Research and Development Organisation (DRDO) and Indian Army at the Pokhran Firing Ranges near Jaisalmer in Rajasthan.

A total of 24 EPRS rockets were fired for different ranges during the last fortnight. However in a single firing charge, a salvo of 12 rockets can be launched in just 44 seconds.

The defence ministry release stated that during Saturday’s test  required accuracy and consistency was achieved by the rockets meeting all trial objectives satisfactorily.

The Pinaka rocket system has been developed by Armament Research and Development Establishment, Pune supported by High Energy Materials Research Laboratory, another Pune-based laboratory of DRDO.

The EPRS is the upgraded version of Pinaka variant which has been in service with the Indian Army for the last decade.

Secretary Department of Defence R&D and Chairman DRDO Dr G Satheesh Reddy has congratulated the teams for completing the flight trials of new design rockets based on advanced technologies in record time.